Soundtrack for a Revolution

View the Soundtrack to a Revolution Trailer

View the Soundtrack to a Revolution Panel Discussion

Yolanda is a performing artist, an educator, and a supporter of the arts.  She performs opera, concert, oratorio, and sacred music nationally and internationally, and is a recitalist/lecturer on Spirituals of the Underground Railroad and other subjects.

She starred in Harriet Tubman: When I Crossed that Line to Freedom, Clarence and Anita, and Cendrillon.

Yolanda is Music Director at First Baptist Church of Tarrytown and serves as a Board Member for the Foundation for Post-Conflict Development, and for Women in Development, New York. 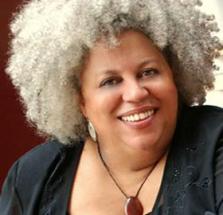 KJ’s special blend of urban folk & jazz will move you to laugh, to dance, and even to cry. She performs and records constantly, has received many prestigious awards, appeared at scores of festivals, and is a regular in many well-loved establishments.

KJ was the first US citizen in her small Grenadian family and picked up her first guitar at ten. She toured with an all-female band called Fire, started the Mother Cyclone label, then formed the NY Unit, a group she still performs with. KJ performs to adoring audiences locally, nationally, and globally.

Elsa is a comedian and activist from Norfolk, VA now residing in Brooklyn, NY. Elsa’s comedy is a mix of critical but lighthearted jabs at homosexuality and race. Elsa’s work has been featured in AM NY, New York Post, NPR’s This American Life, Gold Comedy, and them.us. In her This American Life segment her story of “The Heart Wants What It Wants” begins at a Black Lives Matter protest in Grand Central Station.

She started a monthly showcase in Brooklyn called Affirmative Laughter which spotlights groups “underrepresented in comedy.”